Reknowned for her beauty, Louis XIII’s Spanish-born queen is a lonely figure at court, spurned by the king, dominated by the queen mother, dismissed as frivolous by the grands, and surrounded by swirling rumors of intrigue, fanned by Anne’s proximity to her lady-in-waiting and closest friend, Marie de Rohan-Montbazon, duchesse de Chevreuse.

Her relations with the king are further strained by her failure to produce an heir; Anne (b. 1601) suffered a series of miscarriages, most recently in 1622 following a fall while running through the Louvre as the queen played a game with her ladies-in-waiting. 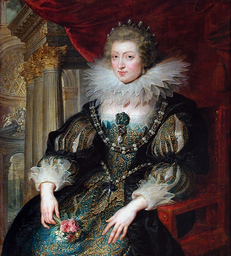