Marshal of France and Colonel-General of the Swiss and Grisons

Bassompierre (b. 1579) comes from an old and distinguised Lorranois family; his mother is German. As a young man he studied abroad for a time in Bavaria and Naples, but in 1598 joined in the court of King Henri IV of France, where the two became friends and rivals in carousing. It is said that the le Grand Henri was at times jealous of Bassompierre for the attention paid him by Henri’s queen, Marie de’ Medici.

Bassompierre fought for Henri IV in the campaign against Savoy in 1600, and fought against the Turks in Hungary on behalf of the Emperor Rudolf II in 1603. In 1614 he served Marie de’ Medici, then queen-regent of France, against the prince de Condé and the other rebellious nobles, but he remained loyal to the young king, Louis XIII, after Marie’s exile from court; Bassompierre served in the royal forces which put down Marie’s rebellion in 1620 at Ponts-de-Cé

Bassompierre continued to serve as one of Louis’ officers through the campaigns against the Huguenots in 1621 and 1622, earning a marshal’s baton. In 1615 he purchased the office of colonel-general of the Swiss and Grisons from the duc de Rohan.

Bassompierre also serves as a diplomat, serving as an envoy extraordinaire to Spain in 1621 over the disputed passes of the Valtelline, negotiating the short-lived Treaty of Madrid. He is also one of the king’s favored hunting companions.

The courtier, soldier, and diplomat desired to marry Charlotte de Montmorency, but Henri IV refused Bassompierre, intending that the mademoiselle should marry the king’s own son, Gaston. Bassompierre is close to the widowed princesse de Conti, one of the ladies-in-waiting to the queen-mother, Marie de Medici.

Bassompierre is known at court for his sharp wit. On returning from Spain, Bassompierre brought a gift from the Spanish monarch for Louis, who is said to have remarked that Bassompierre was a donkey riding a mule. The courtier quickly returned that he was merely serving as the king’s representative. The duc de Vendome is said to have told Bassompierre that he must be one of the duc de Guise‘s faction owing to his relationship with the princesse de Conti, Guise’s sister; Bassompierre rejoined, “I have loved many of your aunts, but that doesn’t mean I love you.” 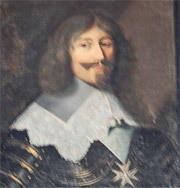