Protector of France at the Holy See

The younger son of a Ferrarese marchese, Bentivoglio (b. 1579) studied at the universities of Ferrara and Padua, receiving a doctorate in civil and canon law in 1598. During a visit by Pope Clement VII to Ferrara, Bentivoglio joined the papal curia as the pope’s private chamberlain.

He was elected titular archbishop of Rhodes in 1607 under Clement’s successor, Paul V, and dispatched as papal nuncio to Flanders, where he served until 1615; he is presently writing a history of the conflict between the Spanish and Dutch in the Netherlands. During his service as the papal ambassador in Brussels, Bentivoglio represented the interests of the Church during the flight of the prince and princesse de Condé from the lecherous King Henri IV, the Jülich war of succession in 1610, and the persecution of Catholics in England and Ireland by the Protestant King James I.

In 1616, Bentivoglio was dispatched to France where he served as nuncio until 1621, when he returned to Rome and was succeeded by Bernardino Spada. On his return to Rome, Bentivoglio received the red hat of a cardinal. He participated in the conclave which elected Urban VIII in 1623 and Bentiviglio maintains close relations with the pope.

On his return to Rome, Bentiviglio assumed the protectorship of France; he acts as France’s representative to the consistory of the Holy See, insuring that French interests are considered in papal appointments, the distribution of benefices, and so on. He is rewarded handsomely by the French crown for his efforts. 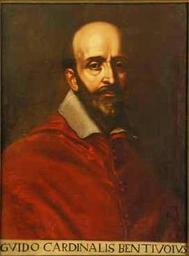