French ambassdor to the Duchy of Parma

A native of Gascony, César-Auguste de Bienvenu grew up in Bazas, the only child of a musketeer lieutenant in the Navarre Regiment. The elder Bienvenu, determined that his son follow a different path in life, saved and borrowed enough money for the boy to attend the University of Bourdeaux. After graduating in 1596, Bienvenu (b. 1574) borrowed the money to purchase a greffier ’s office. After a few years, he received a commission as a hussier to the Parlement of Bourdeaux, which was followed in 1604 by a bailiff ’s commission.

In 1608, he purchased an office, overseeing a royal salt warehouse in Bourdeaux, and it was here that he would meet the prince de Condé, then the governor of Guyenne. Bienvenu impressed Condé with his demeanor – in particular, the prince was struck by the soldier’s son’s eye for human weakness – and the next year Bienvenu was commissioned governor of the coastal town of Dax.

In 1618, Bienvenu received a présidial magistracy, and it was this year he met the new governor, the duc de Mayenne. Like Condé, Mayenne was struck by Bienvenu’s clear-eyed view of the work of governance, and the duke recommended Bienvenu to the duc de Luynes, the king’s chief minister. In 1621, Bienvenu was dispatched as ambassdor to the Duchy of Parma, where he represent the interests of His Most Christian Majesty through the regency of the young duke, Odoardo Farnese.

Bievenu is known as a keen observer of men and a loyal servant of the crown. 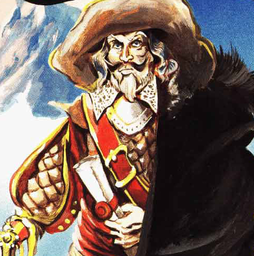