The son of a procureur of the Cour des Aides of Rouen, Bois-Robert (b.1589) studied and practiced law in the city of his birth. In 1622, he travelled to Paris where he soon fell in with a group of poets, including Marc-Antoine Girard de Saint-Amant and Théophile de Viau, known as “the libertines.” After the trial of de Viau in absentia for licentious and blasphemous writings, Bois-Robert joined the circle of Malherbe, which allowed him to join the royal court; in the following year, he participated in the ballet Bacchanalia at the Louvre.

A Huguenot, Bois-Robery abjured the Reformed faith in 1623, was ordained and became abbot of Châtillon-sur-Seine. Introduced to Cardinal Richelieu, the poet impressed the prelate with his intellect, his conversation, and his satirical wit, and at the minister’s direction, Bois-Robert participated in an embassy in London.

Bois-Robert has a passion for acting and is a regular at the Hôtel de Bourgogne. 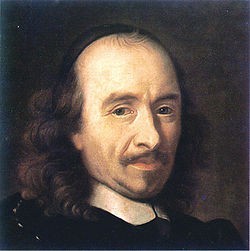