The family of Gilles de Cessey (b. 1584) was active in the Catholic League during the civil wars of the last century – Gilles’ father was seriously wounded at Ivry in 1590, fighting under the command of the duc de Mayenne, ending the vicomte’s service to the League, but the old vicomte never accepted as sincere the conversion of Henri of Navarre which enabled the former Huguenot to be crowned as King Henri IV.

Gilles grew up at the court of the Montmorency family. His father passed away in 1599, leaving the title and family’s Languedoc estate to Gilles. The following year Gilles served Henri IV as a gendarme during the War of Saluzzo with Savoy and Henri’s widow and regent following his death, Marie de’ Medici, during the War of the Jülich Succession in 1610. In the years between, the vicomte went abroad, to Madrid, Genoa, and Vienna; on his return, he married Marie de Boussagues in 1605, which brought the vicomte an additional estate as her dowry. The vicomte and vicomtesse have two children: Guillaume (b. 1607, styled baron de Cessy), presently serving the graf von Tilly, in the Bavarian army of the Liga, and Germain (b. 1609), sieur de Boussagues, a student of theology and law at the University of Toulouse.

Following the demonstration against the duchy of Jülich, Gilles enjoyed the favor of the Queen-Regent and settled into the life of a courtier in Paris, brokering his influence at court with the nobles of his considerable Languedocien clientele. Through the noble rebellions of the following decade, Gilles remained loyal to Marie, but he refused to rally to her camp during the War of the Mother and Son in 1620, retiring to his estates instead. Gilles returned to court the next year, where he was welcomed by the king and made a valet du chambre.

Though he spends the lion’s share of his time at court, Gilles de Cessey still takes an active hand in managing the affairs of his estates, and significantly expanded his fortune though investments and rentes. His personal wealth allows him to indulge a well-known passion for horses and horse-racing, and he is a patron of fencing masters. A portly man all his life, the vicomte is surprisingly graceful and earned a reputation in his youth as a skilled swordsman; he continues to train regularly and enjoys staging competitions and demonstrations of martial skill.

The vicomte is known to be close with his brother, Gaspar, abbé de Cessey, a procureur (attorney) for the Parlement de Languedoc and a member of the curia of the bishop of Barmie. He is generally affiliated with the dévot faction at court. The vicomte is a member and officer of Club Saint Louis in Toulouse, from which he enjoys reciprocal privileges at the Bishop’s Club in Paris. 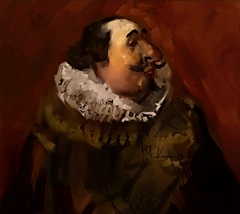