The Cardinal de la Valette is the youngest of the sons of the duc d’Épernon. Chosen for a clerical career, the cardinal (b. 1593) was named Archbishop of Toulouse in 1613 and received a number of abbeys as sinecures. La Valette received the red hat in 1623, along with the deaconry of San Adriano.

Despite his sacred orders, La Valette maintains a decidedly worldly lifestyle. He is known at court as the “little husband” of the princesse de Condé. Unlike his father and brothers, La Valette is on good terms with Cardinal Richelieu. 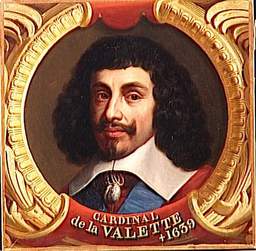