Son of the duke of Savoy

A younger son of Carlo Emanuele, duca di Savoia, Maurizio (b. 1593) was made a cardinal at the tender age of fourteen and bishop of Vercelli a few years later without taking holy orders. Though raised at the court of King Phillip III of Spain, he participated in the the wedding arrangements of his brother, Vittorio Amadeo, principe di Piemonte to Christine Marie de France, the sister of King Louis XIII, in 1618 and served as a cardinal-protector of France in Rome, voting for the French-leaning Pope Urban VIII in the Conclave of 1623. He is a lieutenant-general of the duchy of Savoy as well.

Cardinal Maurizio is a well-known and -regarded patron of the arts, supporting painters, sculptors, architects and musicians while running up considerable debts in the process. 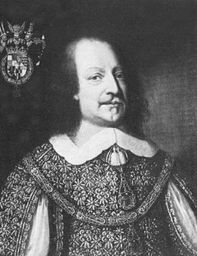