Leader of a band of thugs on the quays of Paris

A veritable giant by the time he was in his teens, Vaast Cassé worked the quays of Paris, loading and unloading the barges travelling up and down the Seine. Cassé was soon recruited by a band of thugs who controlled the quays, and by dint of his cunning, his great strength, and his adherence to violence, he soon made the band his own.

Cassé is an unmistakable presence by virtue of his size as well as his physiognomy – prematurely balding and horribly scarred, with a smashed nose and shattered teeth, he is reputed to be the ugliest man in Paris. It’s said that no man can outdrink him. He is known to carry a great hanger on his belt, which he uses to terrible effect, as well as an oaken cudgel with which he administers savage beatings to those who challenge him. 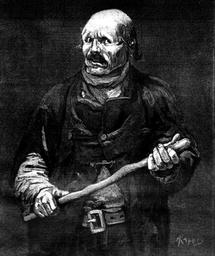