Through the Wars of Religion the barons de Challons were loyal allies of the princes de Condé and supporters of Henri de Navarre, later King Henri IV le Grand. The sixth baron, Salomon de Challons, elevated to count in 1594, was killed by an exploding cannon at the siege of Amiens in 1597. His son, Pierre, converted to Catholicism in 1592, but Pierre’s son, Hiérosme, returned to the Reformed faith of the previous generations of Challons.

At the age of fifteen, Hiérosme (b. 1591) entered Dutch service as a cadet, but a ceasefire with the Spanish, followed by the Twelve Years Truce in 1609, ended the conflict, and the young soldier journeyed east, offering his service to the King of Sweden in 1610. He saw action in Ingria and commanded a company of mounted arquebusiers during the war against the Danes between 1611 and 1613. In 1613, Pierre de Challons died and Hiérosme returned to France at the end of the year, now the comte de Challons. In 1614, Challons joined a number of Huguenot nobles who sided with the prince de Condé against Marie de’ Medici, the Queen-Regent, and her Italian favorite, Concini, in order to force a meeting of the Estates-General.

In 1616, Challons commanded a light cavalry battalion under the duc de Lesdiguières in Italy until the king ordered the duke’s army to return to France the next year. Challons married on his return to France, but his wife died in childbirth the following year.

Challons joined the armies of the Elector-Palatine, Frederick V in 1619 and served under the Prince of Anhalt-Bernberg in Bohemia; he survived the Battle of White Mountain in 1620, then later fought in the Palatinate until the Spanish and Imperial forces drove Frederick into exile in 1622. Challons considered a request from the duc de Rohan to join Huguenot forces in Languedoc, but Rohan signed a peace treaty with the king before Challons could return to France; following the end of the Twelve Years Truce and the resumption of war with Spain, Challons rejoined the Dutch instead and was captured by the Spanish in 1624 when his horse was shot out from under him during a reconnaissance near Breda. Treated well by the Spanish commander, Ambrogio Spinola, Challons tendered his ransom and was repatriated to France in early 1625.

On Challons’ return, his old commander, Lesdiguières, now the constable of France, encouraged him to join the campaign in Italy alongside the duca di Savoia against the Genoese and Spanish, and the comte received the king’s permission to raise a company of French cavalry for this purpose. In 1625, Challons was promoted to colonel and encouraged to raise a regiment for service with the Danish king, Christian IV, in the Empire. 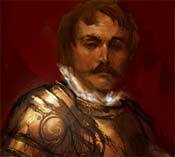