Gaspard de Bléneau (b. 1603) is a member of the once-illustrious Courtenay family. Descended from King Louis VI Capet of France, the Courtenays included emperors of Constantinople and counts of Edessa during the Crusades, but the family’s fortunes declined over the centuries. Attempts to restore the family to greatness by securing the dignity of foreign prince from Henri IV and Louis XIII failed to gain support from the chancery, and the different branches of the family remain obscure members of the minor nobility.

Gaspard, son of Edmé de Bléneau, seigneur de Bléneau, joined the royal army in 1620; unable to secure a billet in the gendarmerie company of the prince de Condé, Gaspard joined the Bourbon Regiment as a gentilhomme cadet musketeer instead. He was wounded at the Battle of Ponts-de-Cé in 1620 and Gaspard saw action on campaign against the Huguenots over the next two years. In 1624, Gaspard was made a knight-aspirant of the duc de Nevers’ Order of the Conception and participated in a caravan aboard a Maltese galley. Now a knight of the order, this descendent of royal-born crusaders helps prepares for a new expedition against the Turks at the head of the Christian Militia, to restore the honor and glory of a once-great name. 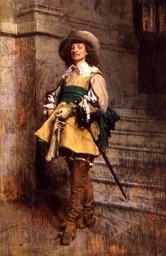