The eldest son of Antoine de Blanchefort, Charles de Blanchefort (b. 1578) followed a career as a soldier, seeing his first action at the age of sixteen. In 1620 he captured the seigneur de Saint-Aignan at the battle of Ponts-de-Cé , whom he defended against the wrath of Louis XIII; Charles was wounded in action at Saint-Jean d’Angely in 1621, during the campaign against the Huguenots, and he was made a Marshal of France the following year. He is also lieutenant-general of Dauphiné.

Charles married Madeleine de Bonne, daughter of the duc de Lesdiguières, in 1595; after her death, Lesdiguières prevailed upon Charles to marry another of his daughters, Françoise, Madeleine’s half-sister. The marquis has three sons, François, Charles II, and Charles III.

An experienced, resourceful soldier, he serves as Lesdiguières second-in-command in Italy. He killed a rival, a bastard of the duke of Savoy, in a duel in 1599, at the age of twenty-one. 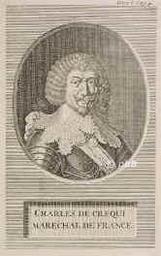