Majordomo to the principessa di Piemonte

Amedeo Dal Pozzo (b. 1579) inherited the family contea (county) at the age of three, following the deaths of both his father and mother. Dal Pozzo’s father, Ludovico, served as president of the Senato in Torino, and the son followed into the service of the duca di Savoia. In 1605, he was named governor of Santhià, an office once held by Dal Pozzo’s grandfather, Francesco. In 1611, he purchased the marquisate of Voghera, and was known thereafter as the marchese di Voghera.

Dal Pozzo was a colonel of Piedmontese militia during the war with Spain in 1615 and 1616, but he preferred court life as a member of the Camera to camp life, serving first as maggiordomo to Vittorio Amadeo, the principe di Piemonte, then to the prince’s wife, Cristina Maria.

Dal Pozzo is a knight of the Order of Saints Maurice and Lazarus. 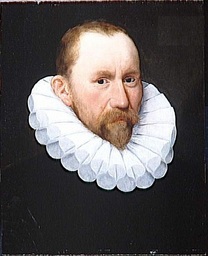