Don Paulo was appointed confessor and spiritual advisor to Lucrezia di Spedi while she was just a young girl, and he remained with her following her marriage to the vicomte de Praz-de-Lys in 1610.

Don Paulo (b. 1577) is pious and credulous, given over to superstition; as a result, he lives in thrall to Lucrezia’s maid, Giovanna. 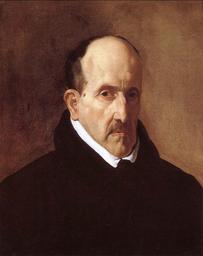