A favorite of King James VI of Scotland, Hay (b. 1590) came to England with the king on James’ succession to the English crown. Hay served in a diplomatic mission to France the following year, arguing on behalf of the Huguenots and annoying King Henri IV in the process. He returned to France in 1615 to arrange a marriage for Prince Charles to Christine Marie, but the suit was rejected by Marie de’ Medici. He served for a time in the Empire, on behalf of the Elector of the Palatine, then returned to France once again in 1621 and 1622 to mediate on behalf of the Huguenots. In 1624 Hay was dispatched along with the Earl of Holland to negotiate a marriage between Prince Charles and Henriette Marie, Louis XIII’s youngest sister.

James I and VI showered Hay with titles and pensions, elevating the courtier as Earl of Carlisle in 1622, and arranged an advantageous wedding for the courtier and diplomat. Hay’s first wife died in 1614, and in 1617 he remarried, this time to Lady Lucy Percy, a daughter of one of the most powerful families in England. Hay is wealthy and extravagant; he is also a fair diplomat, cagey and creative. 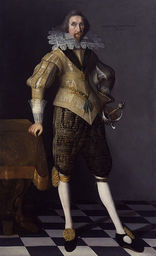