Colonel-General of Infantry and governor of Guyenne

Born at Caumont in Languedoc, the duc d’Épernon (b. 1554) followed in the footsteps of his father and grandfather by choosing a military career, serving first the Catholic kings of France against the Huguenots during the Wars of Religion. Épernon came to the notice of the duc d’Anjou – the future King Henri III – during the seige of La Rochelle in 1572, and by 1578, he was a member of the king’s favorites, les mignons. He was elevated to his dukedom in 1581 and was awarded numerous titles and offices by the king – chevalier of the Holy Spirit, colonel-general of the infantry, admiral of France, and numerous governments including those of Normandie and Provence.

After the assassination of Henri III in 1589, Épernon joined the Catholic League against the new king, Henri IV; the duke attempted to to create an independent government in Provence, but, defeated and disgraced, in 1596 he was forced to submit to the king. Épernon never accepted Henri IV as the rightful ruler of France, however, and it is rumored, though never proved, that the duke aided the regicide Ravaillac who assassinated Henri IV in 1610; Ravaillac went to his death insisting he acted alone, on a vision from God, but it’s known that he stayed at the home of the duke’s mistress, Charlotte du Tillet, prior to the murder. Épernon immediately supported Henri’s widow, Marie de’ Medici, as the queen-regent of France during the minority of her son, Louis.

In 1618, Épernon withdrew from court over the treatment of Marie following the assassination of the Italian favorite Concini, marquis d’Ancre. The next year, Épernon freed Marie from her captivity in Blois, prompting the first War of the Mother and Son. He continued to support Marie in 1620, during the second War of the Mother and Son; following Marie’s defeat and subsequent reconciliation with Louis, Épernon receieved the government of Guyenne in 1622 at the end of the campaigns against the Huguenots in which the duke took an active role on behalf of the king.

The duke remains an influential and outspoken member of the dévot faction at court. 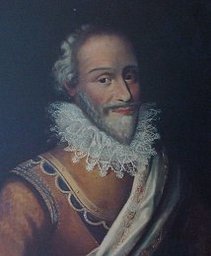