Esnambuc is a Norman, the third son of the sieur de Quenouville et d’Esnambuc. Debts forced the sale of the family estate in 1599, and in 1603 Esnambuc used his portion of the inheritance to outfit a small barque, the Argus, sailing for the Carribean and the Spanish Main, to trade in defiance of the Spanish laws restricting trade. The voyage was a success, and Esnambuc and the Argus continued smuggling contraband through the Spanish possessions. By 1620 he purchased a larger ship, the Marquise, and in addition to his sailors he begins taking marines as well. Again he succeeds, and after attracting additional investors, he outfits a third ship, the Hope, in 1623, a heavily-armed merchantman.

Esnambuc is highly regarded for his skills as a navigator and seaman, and few living Frenchman can equal his first-hand knowledge of the Caribbean and the coast of South America. 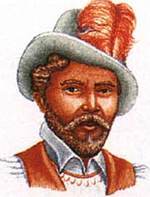