Baldissere Sanguinetti, known by his nom de guerre of Fortunio, is a Venetian mercenary who joined the household of the marquis de Condillac as captain of the guard for Château de Condillac. After 1614, he became a fencing instructor to many of the noble families in Dauphiné. In the early 1620s, he founded the Scuola di Scrimia fencing school in Grenoble. He served as a collector for debts on behalf of the Dutch banker, Absolon Breydel, until the latter was exposed as a Spanish spy in 1625; both Fortunio and Breydel fled the cityn. Fortunio is believed to have returned to Dauphiné with Marius de Condillac, the marquis’ half-brother, in an attempt to seize the château – Marius was killed, and the Venetian’s fate is unknown.

A lean, hard-eyed man, the veteran soldier is a skilled swordsman with a reputation for dirty fighting. 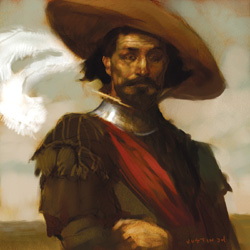