Nevers is the son of Ludovico di Gonzaga. Ludovico, a younger son of Duke Guglielmo of Mantova and Montferrato, was sent to France in 1549 and naturalised so that he would be eligible to inherit titles and lands from his French ancestors. Ludovico, known as Louis de Gonzague in his adopted homeland, was a preeminent foreign prince of the court of France, serving the kings in war and peace; his wedding to Henriette of Kleves in 1565 brought him the duchies of Nevers and Rethel and the principality of Arches, which passed on to his third and surviving son, Charles, on Ludovico’s death in 1595.

Through his mother Charles de Gonzague-Nevers (b. 1580) holds claims to titles throughout the Spanish Netherlands, including Brabant, Jülich, and Kleve, as well as his ancestral family connections with the duchies of Mantova and Monferrato. Nevers is also descended from Andronicus II Palaeologus, the 13th century Byzantine emperor, giving him claim to the title of emperor of Byzantium.

Nevers distinguished himself as a soldier early in life, at the age of fifteen serving the Catholic League against King Henri IV and the Huguenots, earning a reputation for reckless bravery and impetuous action. A few years later he would serve the Holy Roman Emperor against the Turks in Hungary and Austria, receiving further praise for his martial prowess.

The duke inherited the governments of Champagne and Brie from his father; his 1599 wedding to Catherine de Mayenne, daughter of the duc de Mayenne, forging a family alliance with the powerful house of Guise and bringing him the duchy of Mayenne in 1621, to add to his already-considerable holdings. It was these holdings, along with the desire to assert his own independence as a foreign prince and a long-standing refusal to accept the rule of Henri IV, which drew Nevers into the revots of the grands against King Louis XIII in the 1610s. This led to a break with the Guise family, led by Charles de Lorraine, duc de Guise, which supported the crown; in 1620, Nevers was challenged by the Cardinal de Guise to a duel, which the king prevented by arresting the cardinal.

As a sovereign prince Nevers pursued his own foreign policies abroad. In 1612 he sought an alliance with the Greek Maniots with the goal of retaking Morea from the Ottoman Turks, and supporting his own ambitions for the imperial throne of Byzantium, but the Turks crushed the nascent rebellion before Nevers could intervene. Nevers soon found a strong ally in Père Joseph, the Capuchin who sought to unite all of the crowns of Europe for a new crusade to retake the Holy Lands from the Ottomans. In 1616, Nevers established the Order of the Christian Militia and effected a landing in Morea with a small expedition which was turned back by the Turks; in 1618 he co-founded the Order of the Conception with his cousin Ferdinand, duca di Mantova, but the outbreak of civil war in the Empire and growing tensions between Spain and France precluded mounting a more powerful crusade against the Turks.

Nevers abiding interest in chivalric orders preceded his foundation of the Order of the Conception. In 1606 he created the Order of the Yellow Ribbon (Ordre de Cordon Jaune), but the order was suppressed by King Henri IV the same year it was founded. Nevers claimed election as grandmaster of the Equestrian Order of the Holy Sepulchre of Jerusalem in 1615, but this claim was supported by neither the king nor the pope.

Nevers dynastic aims have alienated him from his natural allies among the dévots of the French court. He remains an influential figure on the stages of France and Europe nonetheless. 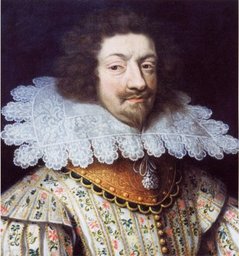