French soldier and member of the House of Lorraine-Guise

Sone of the duc d’Elbeuf and a member of the powerful Lorraine-Guise clan, Henri (b. 1601) served an apprenticeship with the Imperial Army in Prague in 1620, where he earned the recognition of his peers for his courage and martial skill as well as the nickname Cadet la perle for the pearl earring he wears.

On his return to France he participated in the campaigns against the Protestants in 1621 and 1622 and continues to serve the royal army at present. 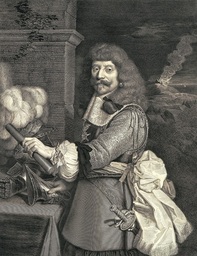