The younger son of a Ruthenian nobleman, Iwan Bodnar joined the Lisowczycy in 1619, when the light cavalry was sent by King Sigismund III to aid Emperor Ferdinand II in the fight against the Protestants. He served in the battle of Humenné that year.

After the Lisowczycy split, Bodnar remained in the Empire with Jarosz Kleczkowski, personally capturing one of the twenty standards seized by the Poles at the Battle of White Mountain. After the Poles were paid off by the following year, Bodnar chose to remain in Bavaria, commanding a company of Poles in the service of Elector Maximiliarn.

Bodnar is a fierce warrior and a respected captain among the feared Polish irregulars. 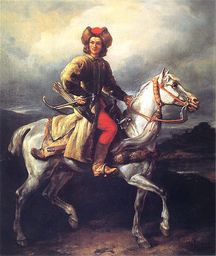