Captain of a gang of Parisian thieves and cutthroats

Guilbert Le Pendu served as an arquebusier in the Normandy Regiment, but he was hanged by one of his officers for desertion and thievery. Amazingly he survived the hanging, which left him with a terrible scar around his neck and reduced his voice to a gravelly whisper. Le Pendu eventually made his way to Paris where he established a gang of thieves and bravos.

Le Pendu possess a wiry build and whipcord strength. He is reputed to be a expert swordsman and a crack shot; he is never without a pair of wheellock pistols taken from the body of one of his victims. Le Pendu is also a skilled gambler, frequenting games in the taverns and dens of Paris 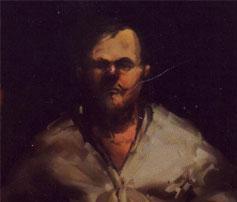