As Constable of France, Lesdiguières (b. 1543) commands France’s army in the name of the King.

Lesdiguières’ career as a soldier began during the Wars of Religion, during which he served as commandant general of the Huguenot forces in Dauphiné. With the ascension of Henri IV to the throne of France, the marshal became a Royalist, serving both le Grand Henri and his son, Louis XIII. In 1622 he converted to the Roman Catholic faith and shortly after was named constable by Louis.

He is widely regarded as an excellent general, particularly in mountainous terrain.

In 1617, Lesdiguières organized a force of ten thousand men, a mix of mercenaries and noble volunteers, including the ducs de Vendome and Rohan, to assist the duke of Savoy in expelling Spanish troops from the duchy. The marshal did not inform Louis of this, creating a difficult diplomatic situation. After several successful battles, Lesdiguières was finally recalled by Louis in the interest of preserving relations with Spain. 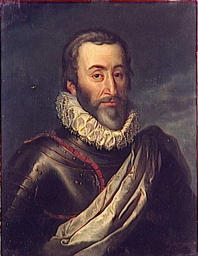