Henriette-Catherine de Joyeuse (b. 1585) was born in the Louvre, and she continues to spend a great deal of her time at the royal court. She was married at the tender age of twelve to the duc de Montpensier, but she did not live with her husband immediately, spending several years in the tutelage of the duke’s brother, Cardinal François de Joyeuse. The duchesse de Joyeuse was widowed in 1608, less than ten years after her marriage.

In 1611, she remarried, this time to Charles de Lorraine, duc de Guise. The couple have seven children.

The primary residence of the duchesse is the hôtel de Guise in Paris. She is a pious woman and a close confidant of Marie de’ Medici, the queen-mother. The duchesse de Guise frequents the salon of the marquise de Rambouillet. 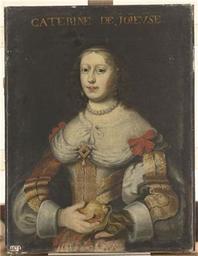