Born Maffeo Barberini in 1568, the future pope received a Jesuit education and studied law at the University of Pisa, graduating with his doctorate in 1589. Through the offices of his uncle, Barberini was named a papal legate and later nuncio (ambassador) to France. He became Archbishop of Nazareth, then later received a cardinalate before his election as pope in 1623.

Barberini inherited tremendous wealth and owns a magnificent palace in Rome. He immediately used his position to place his brother and nephews in powerful and lucrative positions within the Church.

The Spanish and their allies believe the pope is too close to France. He is presently attempting to negotiate a settlement to end the fighting between Genoa and Savoy and their respective allies, Spain and France. 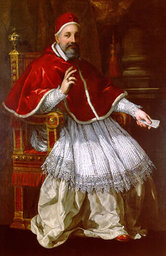