Captain of the Queen Mother's bodyguards, brother-in-law of Cardinal Richelieu

Scion of an old but impoverished sword noble family of knights and prelates, Urbain de Maillé-Brezé (b. 1598) is born the seigneur de Thévalles and follows a long family tradition of joining a guards company. In 1615, in consideration of his family’s long service to the crown, and for a large sum of money, he is made a marquis, leaving him with a title and little else. His fortunes change beginning in 1617 when he marries the daughter of another nearby noble family, Nicole du Plessis, a woman some ten years his senior but with whom he is besotted. Nicole is the sister of the bishop of Lucon, secretary of state and war under Louis XIII, and for a brief moment it appears his prospects may rise, but the government changes and the bishop is exiled until 1620. On the bishop’s return, however, following the second War of Mother and Son, the marquis de Brezé is selected as the head of the bodyguards of Marie de’ Medici while his wife becomes a lady-in-waiting to the queen mother.

With his brother-in-law’s recent elevation as a cardinal and the head of the king’s council, it appears that the marquis may see his fortunes continuing to improve. 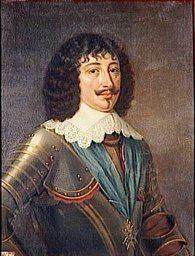