Malherbe (b. 1555) was born in Normandy but later established himeself in Provence where he served as a secretary on behalf of King Henri III. Malherbe was a relatively minor figure at court for many years, but he achieved noteriety for a poem of welcome for Marie de’ Medici on her arrival from Florence in 1600, and later verses of praise for King Henri IV, and in 1606, with royal pensions and his father’s inheritence to support him, Malherbe became a fixture of the courts of Henri IV, the queen regent, and now Louis XIII.

Malherbe is vain, arrogant toward his rivals but generous to his friends. He is a regular visitor to the salon of the marquise de Rambouillet. The poet is friends with the scientist and antiquarian Nicolas-Claude Fabri de Peiresc, and Honorat de Bueil is one of Malherbe’s most enthisiastic followers. 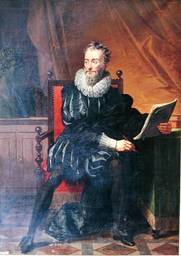