Marie (b. 1575) is the queen mother of King Louis XIII; Gaston, duc d’Anjou; Elisabeth, queen of Spain; Christine Marie, princess of Piedmont; and Henriette Marie, who is presently in negotiations to become the wife of the Prince of Wales and the future queen of England.

Marie, the daughter of the grand duke of Tuscany and the archducess of Austria, arrived in France in 1600 to become the second wife of King Henri IV. Willfull and stubborn, she very publically and stridently clashed with the king over his many mistresses.

After the king’s assassination in 1610, Marie served as regent during the minority of her son Louis. She fell under the influence of one of her Italian ladies-in-waiting, Leonora Dori, and Dori’s unscrupulous husband, Concino Concini. Marie began persecuting Huguenots in the name of defending the Roman Cathoic church and allied France with its traditional enemy, Spain, by marrying her daughter Elisabeth to the prince of Asturias and the Infanta Ana to her son, Louis; she was advised during this time by one of her councillors, the bishop of Luçon (the future Cardinal de Richelieu). Concini meanwhile looted the treasury, accumulate titles (including marshal of France, despite never setting foot on a battlefield) and arrested the prince de Condé. The grands revolted and the queen regent was further forced to reduce the treasury to buy their loyalty and avoid an open revolt. Finally a plot was developed in which Concini was killed and Dori tried, beheaded, and burned as a witch. Marie was banished to her estate at Blois by Louis, who assumed control of the kingdom.

She briefly led an revolt against the king in 1619 and 1620, claiming that her son was unduly influenced by the duc de Luynes. The revolt was quickly suppressed. Marie did manage to have her own councillor, the bishop of Luçon, placed on the king’s council of advisors of state in 1624 and secured for her favorite the red hat, making him the Cardinal de Richelieu.

Marie is a dévot. She favors alliances with the Hapsburg princes against the Protestants. During her time as regent she built the Palais de Luxembourg as her personal residence in Paris; she also oversaw building programs to improve the quality of life in Paris and donates to charities for the poor. Once an exquisite beauty, she is now a matronly dowager. Marie is also a patroness of the arts, in particular her court painter, Peter Paul Rubens. 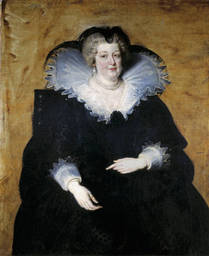