French ambassador to the ducal court of Savoy

Born and raised in Tuscany, Cladio di Marini is a naturalized subject of France. As a young man he travelled to Paris to join the court of then-regent, Marie de’ Medici with the ducal ambassador. He earned the queen-regent’s notice, and that of her favorite, Concini. Marini was dispatched by Concini, a fellow Tuscan, as envoy to a number of Italian princes. After Concini’s death, Marini managed to remain in favor with the duc de Luynes, largely by betraying many of Concini’s secrets.

In 1619, shortly following the marriage of the king’s sister, Christine Marie, to the principe di Piemonte, Marini was dispatched to the court of the duca di Savoia, where he continues to serve France as ordinary ambassador.

Marini is a flamboyant figure with a taste for the extravagant, but he is also a shrewd diplomat who enjoys the confidences of the duke. As a represenatative of France with knowledge of affairs at court, he is a favorite of the principessa di Piemonte.

Marini was married briefly but his wife died of illness. 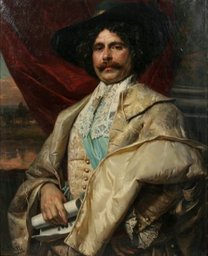