Marius de Condillac is the son of the comtesse de Tressan and the half-brother of the marquis de Condillac. From the time he was born, Marius’ mother schemed for his advancement, imprisoning her ward, Valerie de La Vauvraye, a landed heiress, in an attempt to coerce marriage with Marius, but Marius chose an even loftier goal, the title of marquis de Condillac. When Marius’ half-brother went off to fight with the Milanese in 1614, he hoped his chance to inherit might come, but the marquis returned safely, and with a bride to boot, Marius decided to act; with the captain of the guards of the château de Condillac, a mercenary and adventurer named Fortunio, Marius tried to kill Florimond, his half-brother. The plot was foiled, and Marius was forced to flee Dauphiné, first to Parma, then later Piedmont.

As a French subject living in Turin, Marius wormed his way into the circle of the new principessa di Piemonte, Cristina Maria, the sister of Louis XII. Marius provided a familiar voice in the Piedmontese court, regaling the princess with Dauphinois gossip gleaned from his mother in Grenoble.

In December 1625, Marius and a small group of mercenaries attempted to seize château de Condillac from his brother, Florimond, but the attackers were discovered and killed to the last man. 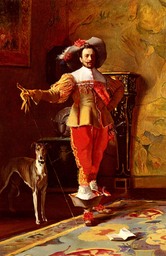