Envoy of the Duke of Buckingham

The second son of Sir Henry Montagu, Baron Kimbolton and Viscount Mandeville and Lord President of King Charles I‘s Privy Council, Walter “Wat” Montagu studied at Cambridge before spending time abroad improving his command of French and Italian. Both Wat (b. 1603) and his older brother Edward are confidantes of the Duke of Buckingham; in 1624, the duke dispatched Wat as his advance man for negotiations with the French court for the marriage of Louis XIII’s sister, the princess Henriette Marie, to Charles.

It’s said that Wat and Henriette Marie became close friends during the marriage negotiations, teaching her English and acquainting her with English court life. 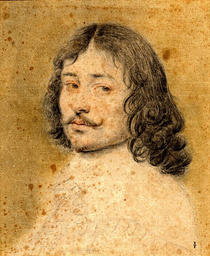