The seventh of fourteen children and a member of the illustrious sword noble family of Rohan, Hercule de Rohan-Montbazon, comte de Rocherfort, would serve three kings – Henri III, Henri IV, and the present king, Louis XIII – as a soldier, administrator, and courtier. Montbazon fought for the royal army against the Catholic League, most notably at the battle of Arques in 1589 and the siege of Amiens in 1597. He rode in the carriage with Henri IV when the king was assassinated in 1610, and was wounded attempting to protect the king by the regicide Ravaillac; he later led the procession for the king’s heart.

Montbazon is one of the most able and trusted courtiers in the kingdom. 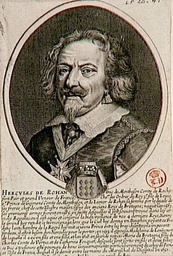