Italian courtier to the Queen-Mother

A lady-in-waiting at the court of the Queen-Mother, Giovanna di Montefusco is the widow of the late conte di Montefusco of Parma, who died in 1623 after just four years of marriage. After inheriting the deceased count’s title and considerable fortune, she moved to Paris the following year.

The contessa is an alabaster-skinned, golden-haired beauty, proud and haughty. She is never without the company of her dwarf, L’Omino. A wealthy widow with a foreign title, the contessa enjoys the attention of many suitors at court, though she shows no interest in remarrying any time soon.

Rumors swirl around the contessa, romantically linking her different noblemen; darker allegations, that she was once a common prostitute in the city of Parma, circulate as well. 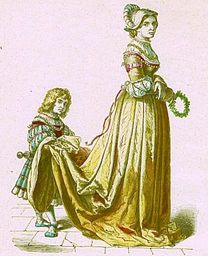