Franciscan priest and missionary of the Propaganda

Born Valentino di Contrari, a younger son of a old noble family of Ferrara, he studied at the university of Ferrara, graduating in 1612. Contrari (b. 1593) completed his doctorate in canon law at the university in Bologna two years later, at which time he returned to Ferrara, entering the Franciscan convent there and taking the name Padre Giulio, to honor San Giulio di Orta.

Giulio was recommended to Guido Bentivoglio, then the titular archbishop of Rhodes and the papal nuncio to the Spanish Netherlands, by the bishop of Ferrara, Cardinal Giambattista Leni. Giulio joined Bentivoglio’s curia in 1616, upon his posting as nuncio to Paris, and remained in France for the next five years, during which he took a particular interest in the Huguenots.

Giulio returned to Rome in 1621 with Bentivoglio, who was named cardinal. Through Cardinal Bentivoglio the Franciscan was introduced to Cardinal Barberini, one of the council of cardinals appointed by Pope Gregory XV to establish the Sacred Congregation for the Propagation of the Faith. Giulio joined the Propaganda, first as a member of the prefect’s curia in 1622, then as a missionary to the Huguenots of the French province of Dauphiné in 1625.

Padre Giulio is esteemed for his command of theological arguments and his quiet but authoritative preaching. He maintains a correspondence with Bentiviglio and Barberini, now Pope Urban VIII, as well as Cardinal Richelieu. 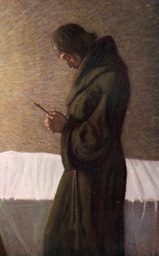