Porthos is one of a trio of soldiers in the King’s Musketeer company known of his dueling skill, or at least for dueling.

Porthos dresses the part of a courtier, subject to the fiscal limitations of both his vocation as a soldier and his skill as a Lothario. His fortunes are such that he rarely makes the impression he hopes. His clear intent is to marry a wealthy woman and retire to the life of a gentilhomme.

Porthos is served by a lackey named Mousqueton, a man who like his master aspires to the finer things in life. 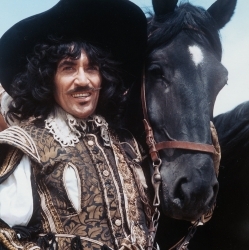