A Savoyard nobleman, Gaston de Montchèvre grew up on his family’s alpine estate in the province of Chiablese. The visconti di Prato-di-Giglio – the family’s Italian title – traditionally serve as soldiers in the armies of the duke, and Montchèvre (b. 1589) is captain of a company of carabiniers .

Montchèvre has French leanings and made several visits to the court of Louis XIII, earning the king’s praise for his skills as a huntsman. The visconte eagerly joined in the fight against the Spanish in 1613 and became friends with the constable of France during the latter’s campaigns in 1615 and 1616. In late 1624, the visconte sent his family to Paris, over the objections of his Piedmontese wife, following the initiation of hostilities with Genoa.

In 1625, Montchèvre was captured by Austrian cavalry during the seige of Verrua and held prisoner in Milan. 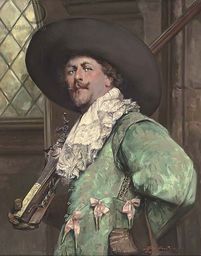