Chamberlain of the duc de Bellegarde, student of Malherbe

Racan (b. 1589) is the scion of a sword noble family from the Tours region. His father and uncle, soldiers in the family tradition, both died before Racan turned thirteen years old; the young man’s guardian, the duc de Bellegarde, made Racan a page to King Henri IV and later chamberlain of the duke’s household.

In 1605, Racan met the poet François de Malherbe, and the court poet took Racan as his protégé. Racan published a folio of poems in 1618 and his play Arthénice was staged at the Hôtel de Bourgogne, where it was very well received.

Racan served in the Royal Army against the Huguenots, serving with distinction in the campaigns of 1621 and 1622.

He is markedly unattractive physically and suffers from a pronounced stutter. 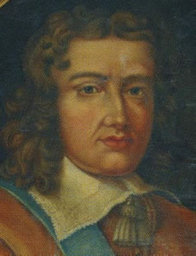