Marseillais investor and clerk for the Chamber of Commerce

Marseillais mercers of modest means, the Riquet family imported Turkish silk for the city aristocracy. The only surviving male heir of the family, Henri Riquet inherited his father’s and his uncle’s fortunes after both men passed in 1611. That same year Riquet (b. 1592) became a clerk for the Marseille representative of the Banco di San Giorgio; by 1614 he was established as a banker and lender in his own right, aggressively leveraging his investments by borrowing from other bankers. Within a few years, Riquet’s success attracted a small pool of investors from among the bourgeoisie and nobility of Marseille.

In 1619 Riquet became a member of The Saracen Club, becoming a secretary in 1626. He obtained a clerk’s position with the chambre de commerce, and in 1626, Riquet received a commission as a royal postmaster.

Riquet enjoys a reputation as a shrewd, aggressive investor. Short, skinny, and decidedly unhandsome, he eschews extravagence, dressing modestly and living simply. He enjoys games of chance but bets prudently. It’s said that Riquet is looking for an advantageous marriage, preferably with a noble family, but gossips say that he hasn’t found the family desperate enough to ally with clerk one generation removed from the quais of Marseille. 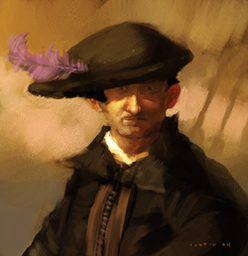