Captain-General of the galleys of Naples

The son of one of Spain’s greatest admirals, the second marquis of Santa Cruz (b. 1571) follows in his father’s footsteps by serving Spain upon the sea. Santa Cruz participated in the defense of Cadiz against the English in 1596, and by 1603 he was appointed captain-general of the galley fleet in Naples. He soon mounted expeditions against corsairs and pirates on the Barbary (1604) and Balkan coasts (1605). The captain-general continued to heap success on success, seizing several Algerian corsairs in 1612 off the coast of Sicily.

In 1614, Santa Cruz assisted in the expulsion of the Moriscos from Spain, transporting the Christian Moors to North Africa. In 1622, he mounted another expedition from Naples against the Barbary corsairs.

Santa Cruz is a grandee of Spain and gentleman of the court of King Phillip IV. 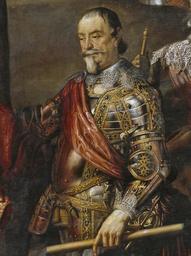