The eldest son of Filiberto Gherardo Scaglia, conte di Verrua, the famous Savoyard diplomat and courtier, Augusto Manfredo Scaglia (b. 1587) was raised in court of the duca di Savoia, a close companion of the duke’s three sons and heirs. In 1603, he accompanied his father and the three princes on a diplomatic mission to Spain. Like most of the Savoyard nobility, he is a soldier as well as a courtier, serving in the defense of the seige of Vercelli during the war with Spain in 1617 and again at the seige of Verrua in 1625. On the death of his father in 1619, Augusto Manfredo travelled to Paris to complete the negotiations for the marriage of the principe di Piemonte to Marie-Christine de France, a sister of King Louis XIII; he was made a knight of the Annunziata that same year. He continued to serve the court as a diplomat as well as Gran Scudiere , one of the three main offices in the ducal court.

In 1605 he married Margherita Biandrate di San Giorgio, a Monferrini widow, assuming the title of marchese di Caluso and the associated lands; his wife is a lady-in-waiting to the principessa di Piemonte. Augusto Manfredo’s brother, Cesare Alessandro, entered the Church and presently serves as the Savoyard ambassador to the court of France. 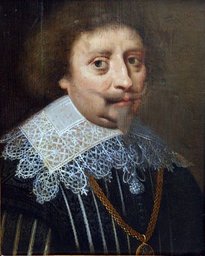