Prince of the blood, Grand Master of the royal household, and provincial governor

Grandson of Louis I de Bourbon, prince de Condé and first cousin of Henri IV, Soissons is a prince du sang – prince of the blood – in line for the throne of France after the king’s brother, the heir-apparent.

In 1612, Soissons (b. 1604) inherited his father’s county as well as the governorship of Dauphiné; shortly after he was named grand maître (grand master) of the king’s household as well. He served on campaign with the king in 1621 and 1622. Proud and prickly, he is rival to Henri II de Bourbon, the present prince de Condé and his cousin, for the king’s favor.

Through his mother, Anna di Montafià, he is related to the ducal family of Savoy. 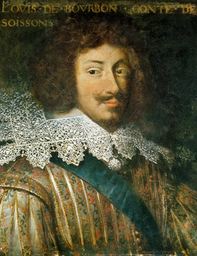