Descended from Flemish ancestry, Sully (b. 1560) was raised in the Reformed faith and at the age of eleven, then titled baron de Rosny, he joined the court of King Henri of Navarre. Sully followe the king to Paris where Sully studied at the collège de Bourgogne; he was in Paris at the time of the Saint Bartholomew’s Day Massacre, and escaped the murderous mobs by carrying a Catholic book of hours under his arm as he fled the city.

At fifteen he joined the Huguenot army and served an apprenticeship in the Netherlands with the prince of Orange. Returning to France and Henri of Navarre a few years later, he demonstrated courage and talent as a military engineer in the service of the Protestant cause during the ensuing Wars of Religion. He was seriously wounded at the Battle of Ivry in 1590, but recovered to join Henri of Navarre in the siege of Paris.

Sully counseled Henri to accept the Catholic faith and thereby win the crown of France. The king, now Henri IV of France and Navarre, rewarded his faithful solider and counselor with titles, estates, and offices, making Sully the superintendent of finances for the kingdom in 1601 and naming him to various governments as well as a duchy in 1606. Under Sully’s ministry, France experienced prosperity and peace as the minister sought to curb excesses by the governors and tax collectors, encouraged trade, and instituted reforms to improve the finances of the kingdom. Ever the military engineer, Sully worked to improve the number and condition of France’s royal roads, lining them with trees which could be used to build ships in years hence; he also promoted agricultural development and the protection of forests and waters.

Arrogant and domineering, Sully earned few friends outside of the king despite his considerable success, and he remained a hated figure by the dévots at court. After King Henri’s assassination in 1610, Sully served only a short time on the council of the the queen-regent, Marie de’ Medici, before retiring to his estates in 1611. He retained a number of his governments as well as the office of grand master of the royal artillery; the latter briefly passed to his son from 1618 to 1621 but reverted to the duke thereafter. Sully did not support the Huguenot rebellions in the early 1620s, but served a short stint under house arrest nonetheless in 1621 before helping to broker the truce between the royal and Huguenot forces during the siege of Montauban.

Sully’s son-in-law is Henri II, duc de Rohan. His son, also named Maximilien, marquis de Rosny, is as profligate and intemperate as the duke is frugal and sober. 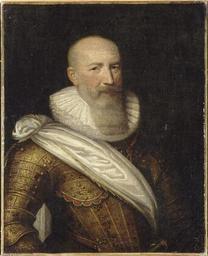