Susanna della Gazada is the eldest daughter of a Genoese nobleman and a distant cousin of the viscontessa di Prato-di-Giglio. The young woman served the viscontessa, to learn the duties of a noble wife before she is married, but in 1625 she was dismissed from the viscontessa’s service and returned home to Genoa, replaced by a daughter of Don Miguel de Salamanca, a Spanish diplomat.

Susanna (b. 1605) is voluble and high-spirited, a sharp contrast with the stately viscontessa , but by all accounts the older woman enjoyed the younger woman’s company. 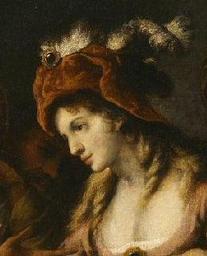