Representative of the Levant Company

Sir Willoughby Swann grew up in Saint Austell in Cornwall; the Swann family owned a small estate as well as interests in local tin mines and was considered quite prosperous. Willoughby Swann (b. 1589) attended Caius College in Cambridge and lived in London for a short time before settling in Plymouth in 1615. Swann proved an adept speculator, exporting tin and wool, though it was rumored that he was heavily involved with smugglers and pirates frequenting the Cornish coast.

In 1619 he was invited to join the Levant Company; he spent the next four years at a Company factory in Alexandretta, learning the trade with the Turks. In 1623, Swann moved to Livorno in Tuscany, then two years later to Marseille as an informal consul.

Swann married a French woman in 1618 and has one son, Wentworth. He speaks English, Cornish, Turkish, Greek, Latin, French, and Italian. 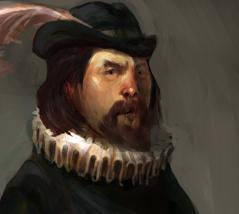