Maréchal de camp in the service of the royal army

At the age of fourteen, Toiras (b. 1585) was sent to serve at the court of King Henri IV. After Henri’s death, Toiras continued to serve his son, Louis XIII as a royal huntsman and a captain of the company in the French Guards. Louis is said to have taken offense at Toiras’s stuttering, thinking Toiras to be mocking the king’s own stammer; Toiras explained that the stutter is entirely his own, and Louis thereafter held the young soldier in his esteem.

Toiras served with distinction in the campaigns against the Huguenots in 1621 and 1622; though a Huguenot himself, his first loyalty is to the king. He is called upon once again in 1625 to fight the Rochellais under the duc de Soubise, commanding the royal forces which seize the île de Ré, a strategic barrier island commanding access to the Huguenot stronghold of La Rochelle. For his success, Toiras is named governor of the island. 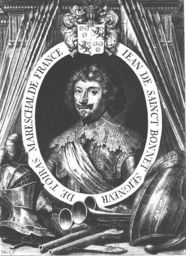