A Gascon Huguenot, Turcaret (b. 1592) rose through the ranks to command a company of mounted arqubusiers (dragoons) in the Navarre Regiment. As Captain Turcaret he was well-known in the royal army for his skill as both a gambler and a swordsman.

A wealthy uncle encouraged Captain Turcaret to lend some of his winnings to soldiers and sutlers on the side, and over time the captain did well enough that he is counted among the significant investors in Paris and Guyenne. He is also a secretary of the Black Cross, favored among the members of the club for his warlike reputation.

Turcaret’s success as a banker and his responsibilities to The Black Cross lead him to sell his captaincy in 1625; he is still referred to as captain by many. 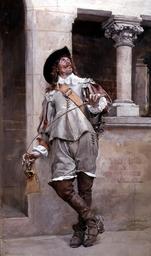