The Andalusian originated in and gained its name from the Spanish province of Andalusia. The roots of the Andalusian reach back to prehistoric times. These prehistoric horses were sculpted over the centuries by the various people and cultures who occupied Spain throughout its long history, such as the Celts of France, the Carthaginians from North Africa, the Romans, various Germanic tribes and the Moors. By the 15th century, the Andalusian itself began to influence various other breeds. Renowned as one of the world’s premier war horses, Iberian cavalry was respected throughout the ancient world: Homer mentions the Iberian horses in the Iliad, written about 1,100 BC and Xenophon highly praised the “gifted Iberian horses” and their role in helping Sparta defeat the Athenians around 450 BC. Hannibal, in the Second Punic War (218-201 BC), defeated the invading Romans several times through the use of the Iberian cavalry. This military use of the Iberian horse continued with William the Conqueror ultimately riding an Iberian in the Battle of Hastings in 1066. While hailed as “the premier war horse,” the Andalusian is also well known for its trusting and kind disposition.

When heavily armored knights began to constitute the majority of the armed forces of Europe the Andalusian was briefly displaced as the most popular war horse. However, after the introduction of firearms, the Iberian horse is once again the mount of choice for royalty and cavalry officers, a favorite horse of the new, rapid and agile mounted armies.

The Andalusian is considered by some as the “royal horse of Europe,” present at every royal court; while hailed as “the premier war horse,” the Andalusian is also well known for its trusting and kind disposition as well as its intelligence, its speed, its proud trot and its catlike agility, making it popular in riding academies across Europe.

The Andalusian is strongly built, yet extremely elegant, with long necks and thick, abundant manes and tails. The typical Andalusian stands 15.2 to 16.2 hands. Approximately four-fifths of Andalusians are white or some shades of gray, with the rest bay or very rarely are black, dun or palomino. 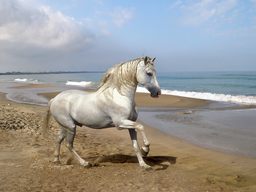