Horse of the desert dwellers

To the Mohammedans, he is considered a gift from Allah, revered, cherished, almost worshipped. Long before Europeans were to become aware of its existence, the horse of the desert had established itself as a necessity for survival of the Bedouin people. The headmen of the tribes could relate the verbal histories of each family of horse in his tribe as well as he could each family of Bedouin. The mythology and romance of the breed grew with each passing century as stories of courage, endurance and wealth intermingled with the genealogies.

Due in part to the religious significance attached to the Arabian horse, as well as the contribution it makes to the wealth and security of the tribe, the breed flourished in near isolation. Traditions of breeding and purity were established to keep the breed asil or pure, in the form intended by Allah. Any mixture of foreign blood was strictly forbidden. While other breeds developed in North Africa and the periphery of the Great Desert, these Barbs and Turks were not of the same blood as Arabians and were disdained by the proud Bedouin.

The Arabian horse is primarily an instrument of war. A well-mounted Bedouin could attack an enemy tribe and capture their herds of horses, sheep, camels and goats, adding to the wealth of their own tribe. Such a raid was only successful if the aggressors could attack with surprise and speed and make good their escape. Mares were the best mounts for raiding parties, as they would not nicker to the enemy tribe’s horses, warning of their approach. The best war mares exhibited great courage in battle, taking the charges and the spear thrusts without giving ground. Speed and endurance were essential as well, for the raids were often carried out far from the home camp, family and children.

Races were held with the winner taking the best of the loser’s herd as their prize. Breeding stock could be bought and sold, but as a rule, the war mares carried no price. If indeed they changed hands it would be as a most honored gift. Through the centuries the tribes who roamed the northern desert of the Levant became the most esteemed breeders of fine horses. No greater gift could be given than an Arabian mare.

The value placed upon the mare led inevitably to the tracing of any family of the Arabian horse through his dam. The only requirement of the sire was that he be asil . If his dam was a “celebrated” mare of a great mare family, so much the better. Mare families, or strains, were named, often according to the tribe or sheik that bred them.

Europe had developed horses through the Dark Ages to carry a knight and his armor. Their lighter mounts were mostly ponies. They had nothing to compare with the small, fast horses upon which the invaders were mounted. An interest in these “Eastern” horses grew, along with fantastical stories of prowess, speed, endurance and even jumping ability. To own such a horse would not only allow for the improvement of local stock, but would endow the fortunate man with incredible prestige. Europeans of means, primarily royalty, went to great lengths to acquire these fabled horses.

With the rise of the Mohammedan faith, Arabia underwent a change in culture. Fired with zeal over their newfound faith, the Arab warriors swept out of the desert mounted on “Arabian horses,” spreading the word of their Prophet by the sword. Bred in the desert their remarkable horses had evolved like finely tempered steel into the swift, elegant, graceful and magnificent warhorse by whose means the Arabs shook the civilized world. The Levant, North Africa, the Mediterranean countries as far west as Spain and others as far east as China, fell to Islam.

European horses soon felt an extensive infusion of Arabian blood, especially as a result of the Christian Crusaders returning from the east. With the invention of firearms, the heavily armored knight lost his importance and during the 16th century handy, light and speedy horses were in demand for use as cavalry mounts. Subsequent wars proved the superiority of the Arabian horse as the outstanding military mount throughout the world.

The high intelligence, trainability, gentle disposition and stamina of the Arabian enable it to excel as a riding and cavalry mount. As an endurance horse, the Arabian has no equal.

A delicate head characterizes the Arabian, often with a “dished” or concave profile below large, prominent eyes; a high-set, arched neck; and a naturally high tail carriage. The back is short and straight; the withers are pronounced and long; the chest is muscular, deep and broad; the shoulders long and sloping; the legs muscular with broad strong joints and clearly defined tendons; and the hooves small with very tough horn, wide at the heel. The ideal height for an Arabian is between 14.2 and 15 hands and they may be chestnut, gray, bay, and black. White markings on the face and legs are common. The coat is fine and silky and the skin is invariably black. The mane and tail are full. 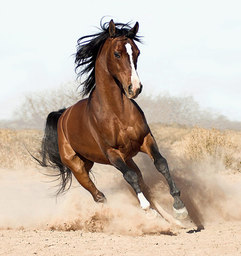