The Boulonnais is said to descend from the horses imported by Julius Caesar’s legions, which stayed along the coasts of the Pas-de-Calais before crossing La Manche to invade England. Much later came the Crusades and the Spanish occupation of Flanders. These events brought a great deal of Oriental and Andalusian blood to the Boulonnais area. Additional crosses with Andalusian stock and Mecklenburg blood from Germany further shaped the breed; the Boulonnais’ speed, elegant build, refined head, silky coat and thick mane can all be attributed to this hot-blooded ancestry.

The horse enjoys a fine reputation with dealers from Picardie and Haute-Normandie coming to buy good animals. The Boulonnais is probably best known for pulling fish delivery carts from Boulogne to Paris, earning the breed the nickname mareyeur , or ‘fishmonger.’ Energetic and lively, with a splendid gait, the Boulonnais excels as a working draft horse and is much admired for its elegant teams in harness.

The Boulonnais is gray in color, ranging from a very light to a dark dappled shade, with an occasional chestnut. They have wide chests and thick muscular necks with short, dense manes and strong legs. The Boulonnais stands between 15 and 15.3 hands tall. 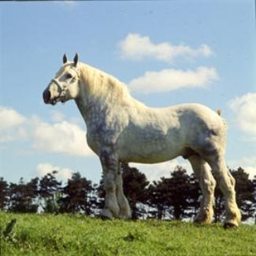