Horse of the sea

The Camargue is one of the oldest breeds in the world. It is native to the swampy delta of the Rhône River, La Camargue, from which the breed takes its name. The Camargue, often called “the horse of the sea,” has existed in this region since ancient times. Through the centuries many armies have passed by the Camargue, including the Greeks, Romans and Arabs. The horses brought with these armies influenced the Camargue over time. It has even been suggested that the Camargue has had some influence on the early breeds in Spain as armies took them back home.

The horses of the Camargue run wild in the marshlands in small herds consisting of one stallion, his mares and progeny. They are ridden by the herders of the Camargue bulls raised for bullfighting in the cities of Languedoc and Provence.

The Camargue is a rugged horse and breeds very true to type, to the extent that it can be difficult to tell one from another. The Camargue horse is born black or brown and turns gray with maturity. They stand between 13 – 14 hands. The legs are extremely hardy with clean joints, a long forearm, and very good hooves. They are not shod. The Camargue is an even-tempered horse, lively, agile, brave and very hardy. It is capable of enduring bad weather and long periods without food, as well as traveling long distances. Its infallible instinct and broad, steady hooves mean that it is perfectly adapted to its watery environment. The Camargue is particularly suited for riding. 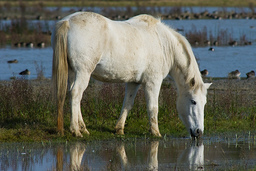